We teachers grew up when summer meant freedom to just be, Time to lay on our backs and stare at the winds movement in a tree, When it took all day to decide you would ride to the store and buy an ice cream….

when on the farm a sort of grace comes in and invites you to drop into your body and go a little more slowly, the flowers and animals all of a sudden have more sway than bright shiny screens, in fact you wonder what could be more delicious than making a flower burritos with a small child out of nasturtium leaves and calendula flowers?….
Or teaching someone how to use a few tools and some leather to make a purse?
Or coming up with a mural to adorn the chicken coop?
Each day I am tired in that good deep way that I remember from my own childhood…
The joy I feel when with kids in nature is the same joy I used to feel before I knew how fast the world wanted me to go… it’s an honor to witness each child that comes here unfold whatever they choose to and lay it down then Run giggling to the goats or swings..and a gift that parents trust us with their gold while it still shines so brightly ❤ KT

Anne has taught children of all ages for over thirty years. She has a Master Degree in Education and a Primary Montessori degree. She has taught in two Waldorf Schools as well. During the school year she welcomes families for farm visits as well as runs a private practice as a Yoga Therapist and Licensed Massage Practitioner. Any chance she gets to travel the world she takes it.

Havilah Rand has over 25 years of experience as a musician and songwriter. She has recorded five full-length albums and toured the U.S.and beyond. In 2006, Havilah received her Master’s Degree in Teaching and moved to Austin, TX where she has taught in both public and private educational settings for the last ten years. She developed Young Songwriter Programs as a way to integrate her passion for creativity and music into her work as an educator. Since 2012, Havilah has led over fifty summer camps, after-school workshops and academic enrichment programs throughout the United States and Europe. In 2016, she was nominated for the prestigious Austin Music People’s Esme Barrera Award for Music In Education and Activism. She has won numerous awards for her songwriting and had several songs featured in films. In addition to songwriting and performing, Havilah is a certified yoga instructor and an avid birdwatcher and hiker.

Joan Green is an environmental artist and art teacher who connects people to the earth and their creativity, through reusable materials. She is influenced by Expressive Arts, Eco-Psychology and the Reggio Emilia approach to being with children. She is an artist in residence with The Climate Science Alliance – Climate Kids program, which educates children about climate change. In 2016 she was an artist in resident at Cabrillo National Monument, where she made art from debris that washed up on the shores of San Diego. Joan has more than 10 years of experience creating with children and the community. She is passionate about giving people the time and space to enjoy nature as they freely create. Read more at www.greenartlabs.com

Studied industrial arts in college and during this time was involved in assisting youth programs in nature. In my forty years as a general contractor working on varied buildings projects, I have had many great opportunities to mentor many young men and women on my crew. I see more and more the importance to teach, encourage and empower our youth. I am excited to bring my woodworking and blacksmithing skills to Full Moon Rising Farm this summer. 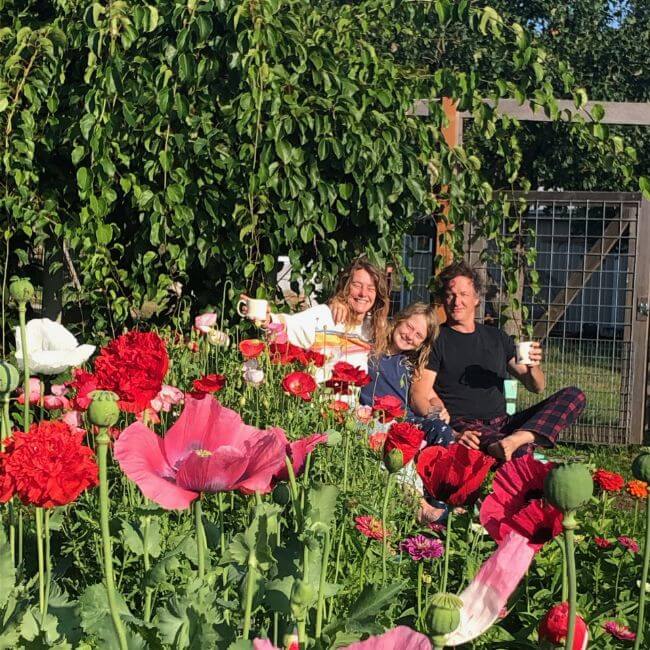 Jeff Petersen is an artist who lives and works in San Francisco, California with his wife and son. His education is rooted in Art and Design and since that time has become an accomplished painter, illustrator, and muralist. He brings his knowledge of various materials and art practice to the Full Moon Camps. Visit his website to see more.

Kate is a magical being hailing from a small beach town near Melbourne, Australia. She first came to the U.S. for an education in acting where she went on to perform as an actress in theatre with an emphasis on Sam Shepard plays. During this time she also became a certified massage therapist in San Francisco where she now practices and lives with her husband and son. She brings her bountiful energy and creativity to the Full Moon Camps.

Ruby Jones is an interdisciplinary artist, focusing primarily on mixed-media sculpture, drawing, and jewelry. Her sculptures deal with themes relating to the environment and ecological relationships, incorporating found and organic materials with cast clay, metal, and plaster. She was raised on south Whidbey and has strong ties to the more-than-human organisms that also inhabit this beautiful place. In her free time, Ruby likes to go on adventures with her little dog Wiley. She is also an avid home chef and gardener. Learn more about her at http://www.rubyraejones.com/

We bring new type of magic and fun to summer camps

"A terrific camp that reminds me of my own childhood camp experiences - lots of time outside, getting dirty, making new friends. My kids loved everything from playing in the woods to feeding the farm animals to eating goat's milk ice cream they helped make. Highly recommended!"

"Coyote Camp is always a blast! Kids love the adventure, the hikes, archery, games, stories, wood carving, crafts, arts and so much more!"

"My son was so energized by what he was learning and doing all week. Not one for crafts he was thrilled to use items in nature to create useful items and, yes, crafts! He came home with more confidence, a greater love and respect for the great outdoors/nature and the reminder that being dirty is fun!"